One little visitor came thru today and looked friendly (i.e. not a feral) and clearly hungry..
See his/her photo here... 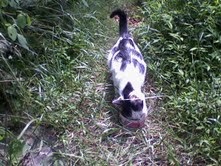 Since you're so allergic to such visitors, I thought maybe you would be noticing them when they wander through the neighborhood...  We're just hoping the little fellow/fem would know where he/she needs to be.. ttyl
Signed
Your Neighbor with all their own three cats, all big boys..


Aug 6th
Continuing notes to that neighbor across the road whose children had spotted the visitor and her four(!) kittens...

So far we still only have 3 and the momma.. so I'm assuming that you are feeding that 4th one, somehow, maybe with her help, since we can't be watching her/them all the time to see if she goes back and forth..  she's usually around when we have gone out though, so there would seem to be some concern for lil-#4...

When you get home, maybe you did notice where she had hidden him/her earlier and could check around to see what they're doing...  maybe they need some help..  we can help feed them for a long time if needed..  what do you say...  what's the scoop on lil-4?

And then there's a storm due tonight and tomorrow...  there's safe, relatively dry space under our porch (where they wait to be fed, up by the door...  there's a tool shelf under the top-step-platform where you step out the door, and the tool area is open-like (all sides, but weeds&stuff shelter it from the wind) so they can go in and out and look around while under 'roof' and off the wet ground... about 4'x5' area that the little ones have been exploring when deciding whether to make the leap to the top step...  we just need to find lil-#4 and get him/her to shelter and food and momma won't need to be crossing the street.

--- then little Louisette showed up

So we named them for the explorers and their indian momma guide Sacajawea...

Meet the rest of the family..

Louisette and Clark, fraternal twins, gray and tabby markings, with Clark having more white mustache and a silver diamond back on his shoulders... Louisette has a dark heart on her shoulder...

Spike Lightning and Buffy Flame, also fraternal twins, black and white tuxedos, sorta like the complement to their harlequine mother,

---------------------------
So tiny that we tried more liquid food -- yogurt milk with chicken broth.. but they were able to savor tiny pieces of meat and canned pate
We estimated that they were maybe 6 weeks old max and that's because Sacajawea was just starting to wean them already.. maybe out of necessity..
and she was so young, maybe barely 7-9 months old maybe, very clean teeth

----------------------------
We arranged the privy bins on our porch so that they had sheltering areas on top of the porch and used a couple new bins, placed at wedge angle to make a cave with one open end wide enough to slide their food plate into the middle and the other open end just wide enough for them to sneak in and out... and the lids making a roof over the gap between the bins...

We put some plastic foam in the bottom of the cave and they seemed to like this hideaway.. but still ran all over the porch, hid in the tool shelf when it was windy and liked to walk the trailer rails.. discovered the fun of running behind the berm-fence and along the crawlspace skirt.. eventually when we did a biobin run and assembled the current year's active bin, they thought the finished bins were super romping strawpiles under the shady tarp-covered arched roofs..

Within a week we had them accustomed to being handled and put them on the scale so we could watch their progress and make sure they were thriving since they seemed to be improving in appearance already... less fleas and better groomed.. the little ones Clark and Louisette weighed just 2 lbs plus or minus, Spike was 2 lbs 2 oz, and Buffy was 2lb 3oz and the momma weighed just 5.5 lbs... all so slim and delicate looking


Mya managed to figure out a way to use the 'playpens' we had bought so that we could travel with our big boys (SilverLining, CattsPurr, and Tangey) in the motorhome to Columbus for the Supreme Court arguing, so that it made a nice apartment for them in the master/garden bath.. just in time because the nights were getting rather colder already..

We ferried them inside and they settled in easily, all together with boxes, shelf perches and a corner resting ledge... various toys made their way into and out of action as needed.

Eventually when we had days when they couldn't go out in the daytime then we had the idea of letting them out into the floor area of the master/garden bath to run about, chasing and tumbling after they ate when we let them out...Sacajawea had her surgery (after she was done nursing and had wanted to run further away one night indicating some return to fertility) and so we separated the playpens again so she had peace and quiet, but she still did seem to be guiding their behavior to be not too rough and tumble. They always had good appetites and Sacajawea did make sure nothing was wasted, very sensibly frugal momma with real world struggle history..


Once when we woke up in the middle of the night, Mya discovered that Sacajawea had brought her own contribution to feeding the babies real meat. One small rabbit trophy, that lasted a couple of days, in bits and pieces. For almost a month Sacajawea had nursed them when they'd get hungry before we'd bring food, and sometimes later when they were startled by some noise in the house...

Sacajawea now weighs 7 lb 4 oz
Clark is 3 lb 12 oz
Buffy and Spike are both 3 lb 10 oz
and lil Louisette is 3 lb 3 oz
and now they can reach up, standing as tall as they can and look over the rim of the 5 gal rain-collecting buckets to see what's inside.. totally unimaginably bigger, definitely not the lil one-handful bundles -- so tiny in the beginning, you'd be frightened to hold them without worrying about tiny paws and tails...

Clark is 4lb 8 oz
Buffy is 4 lb 6 oz
Spike is 4 lb 2 oz
Louisette is 3 lb 11 oz and has regained the weight she lost last week when she had the mushies... we think she was ridding herself of a worm (in the litterbox, dried) and we tried kibble but decided that fluids were highly desired in the form of chicken broth/bone-jelly.. they are all on diatomaceous earth for as long as they are still going outdoors.. Spike also seemed a little wan..

Too early in our opinion, but we survived a not-so well-done stitchwork.. remember next time to specify a different surgeon.

[Buffy recouperating in her hammock and playpen in the intensive unit ]

Buffy's flyer
Fortunately, we have hyperbaric oxygen to speed wound/surgery healing, just like the sports stars and Buffy is quite an elegant athlete, like her momma Sacajawea. For more on our operating practices -- our brochure TTYL
Posted by indymichael at 5:43 PM No comments: 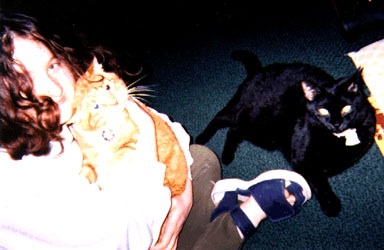